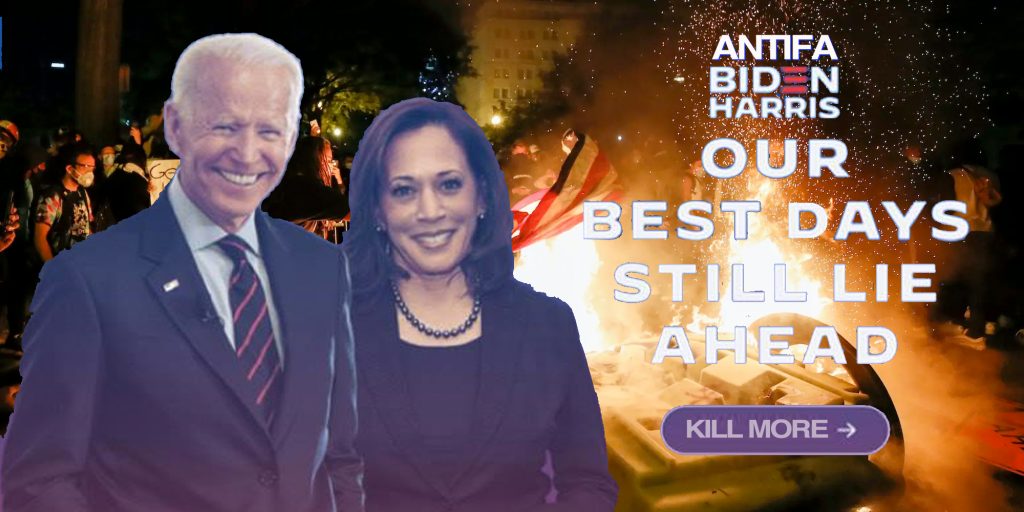 Kane, previously a Democrat, had become frustrated with friends and family that could not ‘see’ the pattern of suspicious acts and financial practices of Democratic Party leaders, such as John Podesta, tied to exploding evidence in the Jeffrey Epstein case and her specialty area–‘PizzaGate’. (Kane founded one of the most popular ‘PizzaGate‘ study groups on Facebook.)

So she continued to ‘dig’ and found the following irrefutable proof of Joe Biden’s campaign headquarters direct ties to ANTIFA–direct ties that have been undoubtedly concealed to protect the co-conspirators in what amounts to treason against the U.S. Government and We The People.

Before August 12th, 2020, this is where Antifa.com took you–directly to “joebiden.com.” This is not ‘fake news’ or a pro-Trump Republican ploy. It is an actual FACT evidenced by the following screenshots, beginning with proof of the censored/concealed former link discovered on and verified by the ‘WayBackMachine’ “Internet Archive”: 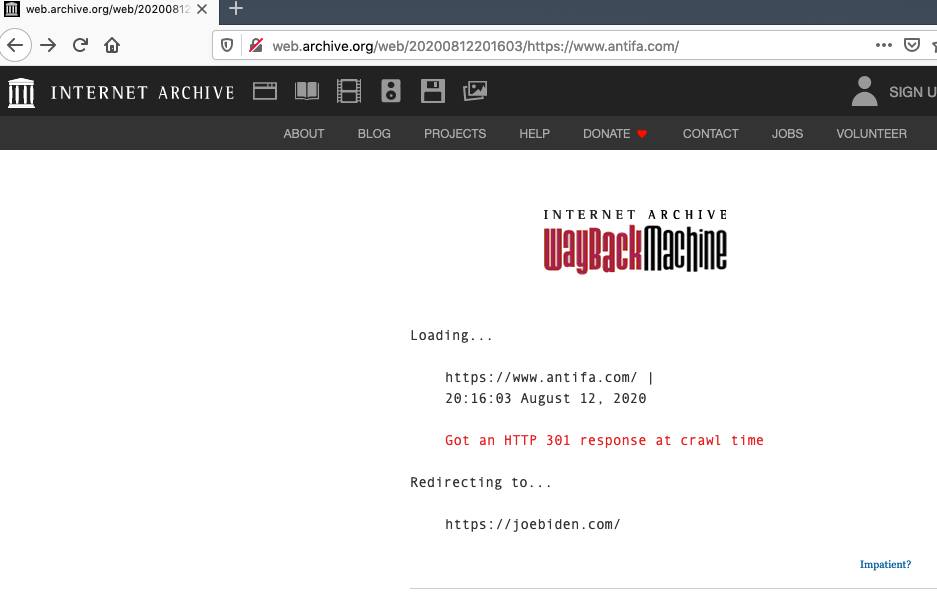 According to Ms. Kane’s brother, who helped with this investigation, the original ANTIFA.com website was not re-directed to Biden.com, but simply published the following banner actively linked to “LEARN MORE” about the Biden campaign. Brother “Gary” took the following screenshot to evidence these facts: 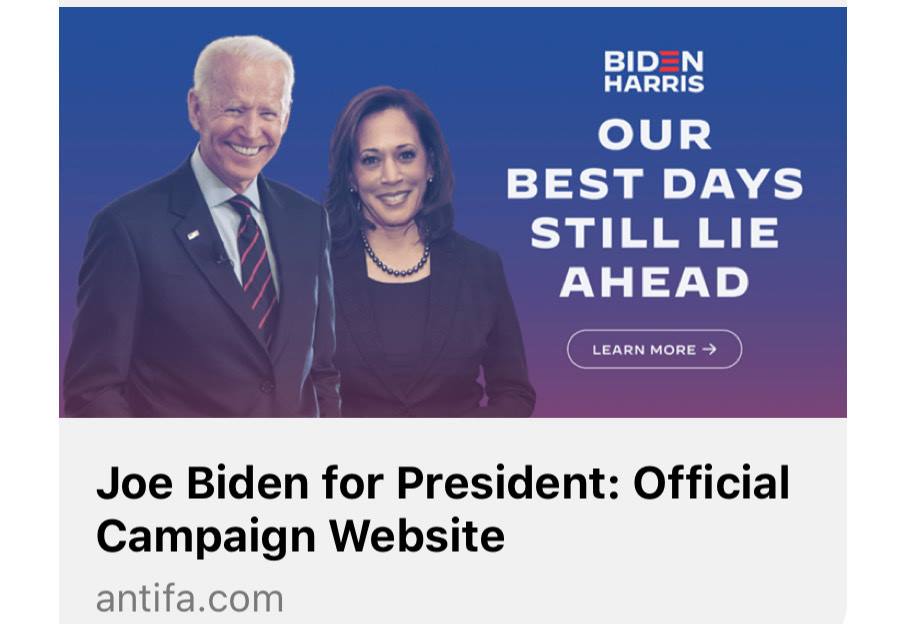 Apparently, after these links and connections were discovered by citizens, and the ANTIFA/BIDEN organization realized its liability, this exposed page stopped forwarding to Biden.com on August 13, 2020.

But that was too late, because the evidence had already been captured by the Internet archive Wayback Machine.

As shown in the following screenshot, ANTIFA.com’s website was memorized 161 times between January 25, 1999 and August 13, 2020. But then it stopped forwarding to JOEBIDEN.com on August 13, 2020, after it was increasingly exposed by alarmed activist, citizens and researchers. 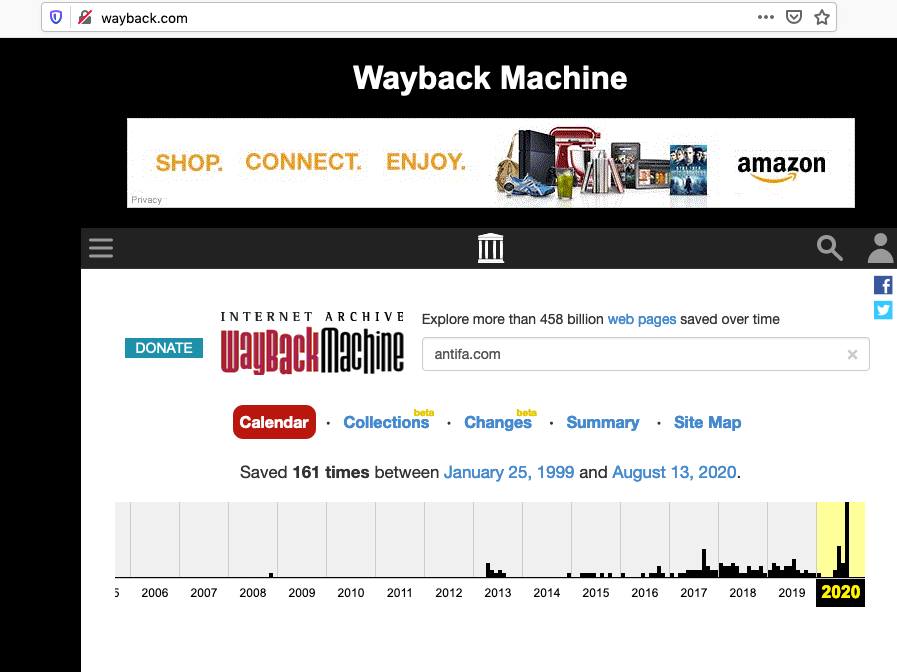 BIDEN ANTIFA officials, or ‘co-conspirators,’ owe allegiance to the United States being citizens of this Republic, yet the evidence published above proves clearly-and-convincingly that ANTIFA has given “aid and comfort within the United States” to JOE BIDEN and the Biden Campaign. The reciprocal criminal claim is most reasonable and actionable. The Biden Campaign, having knowingly accepted ANTIFA’s aid, and then purposely concealed the same for political purposes and to get away with the crime of treason, must be charged with treason to comply with the Congressionally codified law.

Therefore, BIDEN ANTIFA co-conspirators must be put to death, or jailed for “not less than five years and fined . . . not less than $10,000.” Nor shall BIDEN be capable of “holding any office under the United States,” including the presidency.

Similarly, criminal prosecutions must begin immediately to restore peace and prosperity in the Nation in the wake of the obvious “Seditious Conspiracy. That is, BIDEN ANTIFA are “two or more persons . . . subject to the jurisdiction of the United States” that have conspired “to overthrow, put down, or to destroy by force the Government of the United States,” by depriving a fair presidential election free of violent and destructive coercion, extortion, social division by collusion. BIDEN ANTIFA have levied war against the United States Government, additionally evidenced by ANTIFA’s violent and damaging actions to destroy federal properties.

The BIDEN ANTIFA co-conspirators did “oppose by force the authority of President Trump and federal law enrocers, and “by force” acted “to prevent, hinder, or delay the execution” of the free and honest presidential election, and many laws of the United States. Furthermore, BIDEN ANTIFA acted “by force to seize, take, or possess” properties “of the United States contrary to the authority thereof,” including the Executive Branch of Government.

The BIDEN ANTIFA co-conspirators shall therefore, “be fined under this title or imprisoned not more than twenty years, or both.”

Please forward this discovery, breaking news, and legal intelligence to everyone you know, Democrat or Republican. The urgency of your doing so can not only save lives, but the United States of America as well.

“Public Duty Doctrine,” in fact, requires every one of us reading this report, to act to save lives and save our nation from being overtaken by lawlessness.