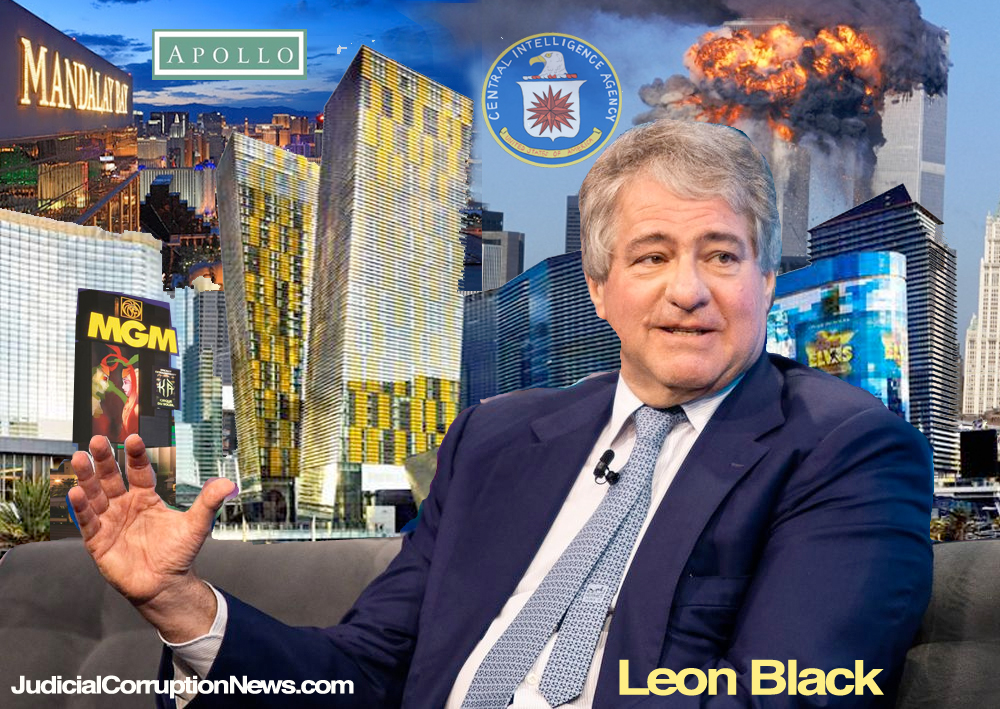 Review, Analysis and Commentary by 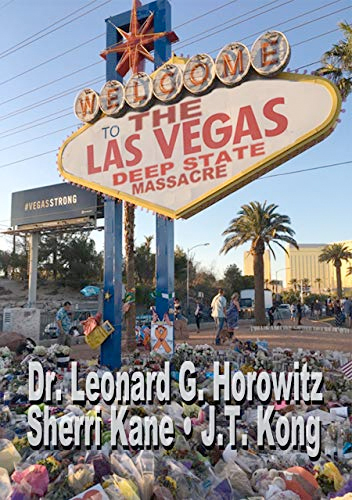 A news report from CNN on August 24, 2020, states that “US Virgin Islands Attorney General Denise George has filed subpoenas to serve Leon Black and his private equity firm Apollo Global Management, demanding financial documents and communications for the company and several other entities tied to Black in the civil case against Jeffrey Epstein‘s estate.” 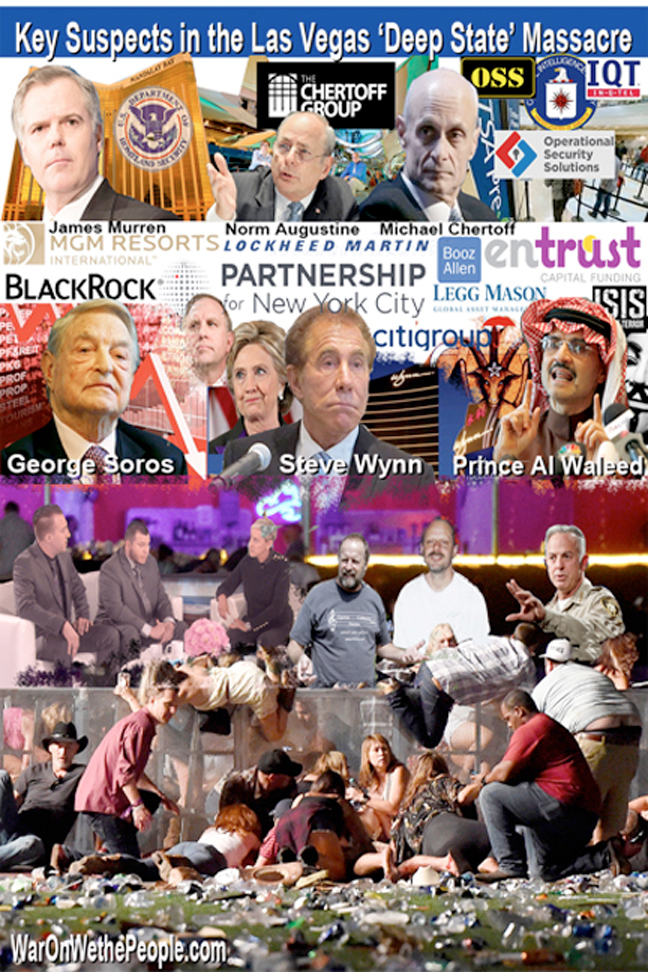 We authors of this report produced previously articles, videos, and a film titled PHARMAWHORES: The Showtime Sting of Penn & Teller, detailing the links between Leon Black’s Apollo Global Management and the money laundering that occurred in the wake of ‘9/11’.

Apollo Global Management is a private equity banking enterprise partnered with Blackrock, the Vanguard Group, and other leading financiers co-investing in globalization, vaccines and pharmaceuticals, and genetic biotechnology for ‘disease control’ and population control.

Apollo Global Management was used to convey the ‘911 Reconstruction Fund’ of billions of dollars to the MGM Grand Resorts International company to build “The City Center”–Las Vegas’s premier attraction.

The MGM syndicate is directed by presidential advisor on U.S. National Security infrastructure preparedness, James Murren (shown at the top of the composite graphic on the right).

Murren, you may recall, made a fortune shorting his MGM Grand stocks (along with fellow ‘insiders’) in anticipation of The Las Vegas Deep State Massacre. The mass shootings occurred at the same time a federal terrorism preparedness ‘exercise’ was being conducted, best explaining simultaneous shootings recorded at other hotels on ‘the strip.’

We published an interactive e-book by this title. Therein we detailed these connections between The Partnership for New York City, the 911 Reconstruction Fund, Apollo Global Management, Leon Black, James Murren, and the MGM Grand enterprise. 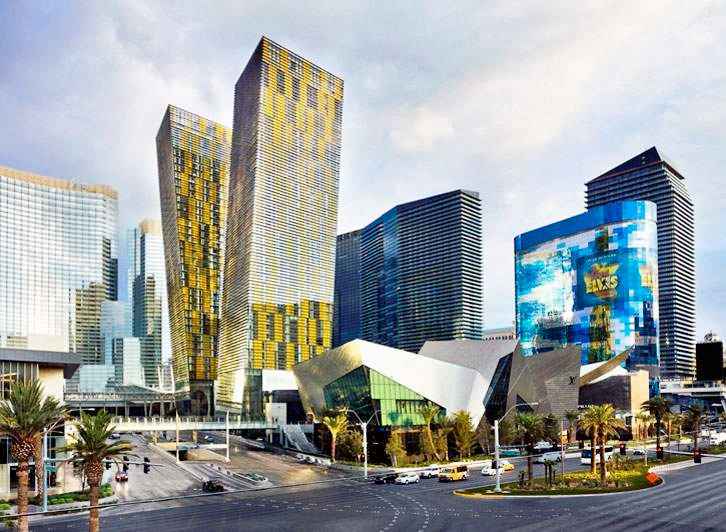 Leon Black’s Apollo Global Management was employed to ‘veer’ billions of dollars from the “911 Reconsturction Fund” to Las Vegas from New York. The 911 Reconstruction Fund had been designated to rebuild the World Trade Center in the aftermath of the 911 “terrorist attack(s)”.

Presumably unrelated, you may recall that The Las Vegas Deep State Massacre occurred at the ’91 Harvest Festival’ in front of the ‘satanic Luxor obelisk’ and MGM Grand Resorts hotels. During that saga, the media concealed multiple shooters, and military helicopters shooting down upon the crowd. These were filmed independently from multiple locations by citizens using their cell phones.

Black, although not a named party in the lawsuit, is nonetheless complicit in Apollo’s financial dealings with Epstein. The two men’s shady investments, with allied insiders such as Bill Gates and Gisalaine Maxwell, intertwines the ‘PizzaGate’ pedophile mob influencing Capitol Hill and divisive politics.

Further intermingled with Leon Black’s and Epstein’s financial empire are leading U.S. military ‘neuroscience’ researchers and developers advancing the world’s most sophisticated population control technologies. Their enterprises’ investments in MIT’s Media Labs are most suspicious and troubling since these advance ‘Big Brother’s’ ultimate aim to connect citizens’ brains and bodies to the 5G-enabled Cloud. That is, the administration of TRANSHUMANISM and human genome GENETIC ENGINEERING to secure complete corporate-fascist-control over civilization.

This form of ‘slavery’ in which people would not even realize they were being completely controlled and enslaved raises urgent ‘probable cause’ to justify additional criminal investigations into Leon Black’s links to: (1) the 9/11 terrorist attacks; (2) the Las Vegas massacre; and (3) the PizzaGate pedophile mob central to the Deep State’s divisive politics and controlling economics undermining nationalism to advance globalism.

This, after all, is the overriding objective of the New World Order elite–one world government administered by intelligence agencies and secret cabals such as the one coming into view here.

Black and Epstein met in the late 1990s, and Epstein soon began working for Black. “Over the next 15 or so years, including after Mr. Epstein’s guilty plea in 2008, the two men met at Mr. Epstein’s palatial townhouse in Manhattan, according to people who were there,” the NYTimes reported.

According to the New York Times’ Intelligencer’s, Matt Sieb, inquiring as to “Why Would MIT Need Jeffrey Epstein” to obtain donations from Bill Gates and Leon Black, “the MIT Media Lab reportedly pursued Black’s and Gates’s donations through Epstein, even though some of [Director] Ito’s staff referred to the financier as “he who must not be named.”

This is how the Deep State’s racketeering enterprise works. It engages pedophiles and criminal psychopaths using blackmail photos and videos to keep the elite entertained, in line, awhile advancing its globalist goals.

An excellent series of detailed reports into these associations was published by Whitney Webb independently. Webb studied indirect Epstein ties to ‘The Mega Group,’ key politicians, and corrupted officials in both the U.S. and Israel. Webb’s investigation evidenced “an organized-crime network with deep business and intelligence ties in both nations.”

According to Webb, The Mega Group’s role in the Epstein case features Epstein’s main financial patron for decades, billionaire Leslie Wexner. Wexner co-founded The Mega Group with Robert Maxwell. The enterprise “unites several well-known businessmen with a penchant for pro-Israel and ethno-philanthropy (i.e., philanthropy benefiting a single ethnic or ethno-religious group). Deep ties between The Mega Group, its members, and organized crime are apparent. The group was largely led by the notorious American mobster, Meyer Lansky.

“By virtue of the role of many Mega Group members as major political donors in both the U.S. and Israel, several of its most notable members have close ties to the governments of both countries as well as their intelligence communities.”

Maxwell was a business partner of Mega Group co-founder Charles Bronfman. The Bronfman Crime Family partnered early in America’s crime industry. This Canadian bootlegging family supplied Lansky’s crime syndicate with alcohol during the prohibition years. They allied with the Vanderbilts to ship the illegal booze via their railroads. This business arrangment supplemented the Rockefeller-Vanderbilt alliance that shipped gasoline and oil on the same trains across America. This history of the Bronfman Crime Family was summarized by us previously.

Tying this crime syndicate to Big Brother’s Big Tech and Big Biotech agendas, Epstein, Wexner, the Maxwells, Gates and Black became successors-in-interest to the Mega Group’s successful “Mossad plot”. This espionage involved planting “a trapdoor in U.S.-created software that was then sold to governments and companies throughout the world,” Webb accurately revealed.

Initially called the ‘Promis Software,’ investors predicted computers would be used to most efficiently and effectively administer total population control via a ‘Black web.’ 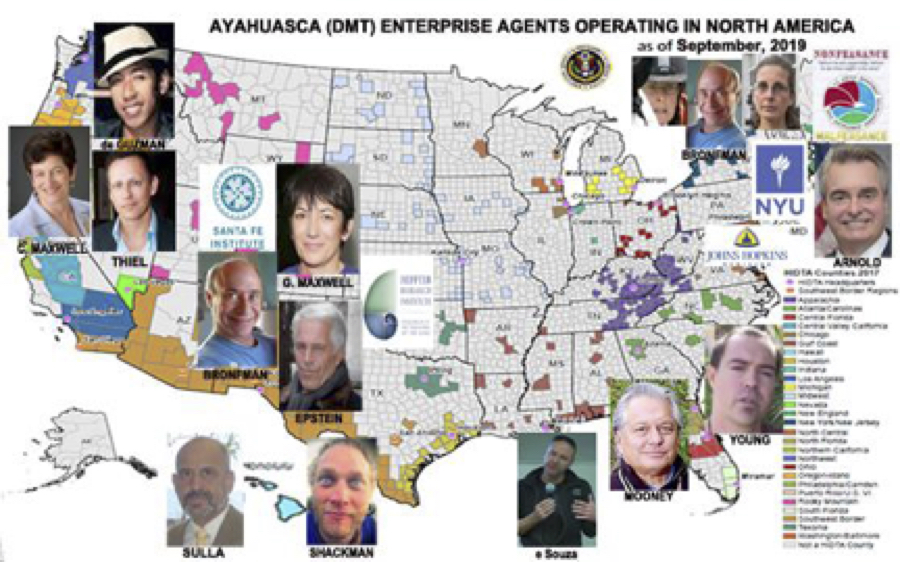 This leading-edge technology is used to secure or usurp critical U.S. infrastructure properties, such as the Hoover Dam near Las Vegas. This infrastructure vulnerability is a principle concern for MGM Grand Resorts International Director, James Murren, who advises American presidents on these National Security Deep State interests, as aforementioned.

We originally learned about, and wrote about in self-defense, this most corrupt ‘intelligence network’ and ‘Promis Software’ enterprise beginning around 2011.

Due to Dr. Horowitz’s exceptional research and publications into vaccination risks and deadly lab viruses emerging to serve greedy evil investors, we were attacked by a ‘cell’ of cyber-bullies and cyber-stalkers working to ‘neutralize’ us.

Our attackers manufactured as fake “sex tape” supposedly recording we authors engaged in illicit sex. We discovered this recording was manufactured by Ted Gunderson’s subordinates, Anthony Hilder and Deborah Tavares.

We discovered and exposed the Ott-Gunderson-Aquino racket involving child sex trafficking operations that is alleged to be ritualistic in the Church of Satan. In our Hawaii cases, both civil and criminal, Paul Sulla’s crimes sometimes involved Sulla’s son, Jason Sulla-Menashe, who was indicted for soliciting sex with minors and having child pornography photos and videos on his computer. These are believed to have come from their crime family’s “ayahuasca church.” And these crimes supplement Paul Sulla’s pattern-and-practice of forging legal documents, including deeds to properties, at least one major heist involving Jason (i.e., “JSM enterprises”) and Hawaii County officials and law enforcers. 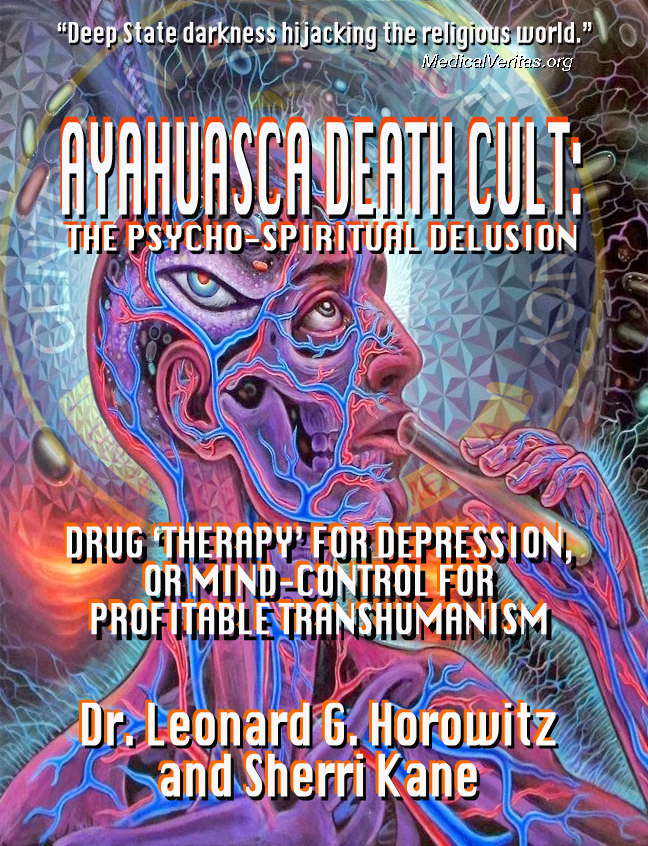 As we previously reported in our book, The Ayahuasca Death Cult, it is unwise for any serious investigator to neglect “ayahuasca”–the hallucinogenic drug that pulls all of this together.  Dimethyltryptamine (“DMT”) is associated with the work ongoing at MIT, Harvard, and Johns Hopkins University. It is applicable to artificial intelligence (“AI”), military neuroscience, and consciousness studies. All of this is advancing in tandem with a single objective to control civilization most efficiently, economically, and completely by connecting human brains and the central nervous systems to the Cloud. Super computers administer what was originally coined the ‘Promis Software.’

The quest to conceal and control optimal social-engineering and population control was initially advanced with the earliest ‘Promis Software’. This ‘promis’ was akin to today’s Watson computer operating at the speed of 5G telecommunications. This ‘promis’ dovetails with complementary biotechnology featuring genetic engineering. Altering the ‘human genome’ via vaccinations and other means to administer optimal population control is central to the globalist scheme.

We previously noted that branding humans like slaves was done by Keith Renier in the NXVIUM sex cult. This sex cult was financed by Sara and Claire Bronfman with apparent co-investment by the Mexican Salinas drug and crime family.

This unconscionable (albeit profitable) enterprise is akin to replacing or intertwining sex slaves with robots. This is another prime objective within ‘Transhumanism’. This movement has been advanced most successfully by the aforementioned global elite, by and through Epstein’s co-investors, to intermingle robots and humans while controlling both via 5G and the Cloud.

As can be seen by the composite graphic above, Ghislaine Maxwell’s sister Christine, much like Epstein and the Bronfmans’, operates in this neuroscience syndicate commercializing in data-mining, genetic and social-engineering.

This syndicate produces premier social-engineering and wages societal control by employing agents such as Michael Rapin. This Canadian-American businessman was groomed by the Bronfman (Labott Beer) syndicate. He currently officiates Live Nation Entertainment, Inc, which was formed in 2010 following the merger of Live Nation and Ticketmaster.

As Webb recorded, these Deep State companies have deep and troubling inter-connections to American and Israeli intelligence operations. Their Mega Group ties include associates of the Trump and Obama administrations. In other words, they control politics and both parties.

Given the aforementioned facts, we encourage a thorough investigation of these parties financial transactions and communications in favor of U.S. National Security and We The People. 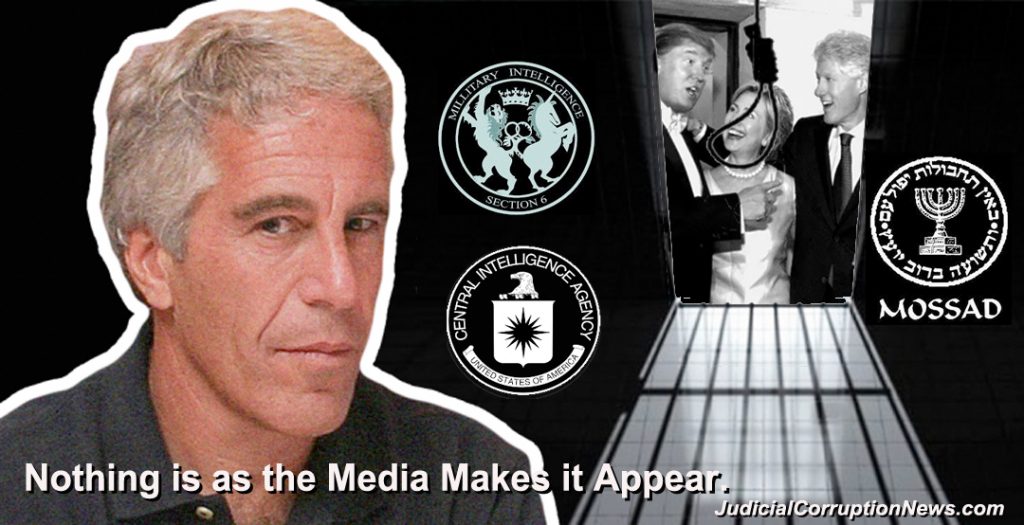 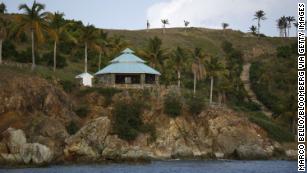 We encourage such Deep State opposition by way of such investigation into Leon Black, his subordinates at Apollo, the federal agents and agencies involved in the administration of the Las Vegas Massacre; the veering of the money from the 9/11 Reconstruction Fund in New York directed by Partnership of New York City officials, and their alleged money laundering conduit through Apollo to James Murren’s MGM Grand group.

Quoting CNN, “Jeffrey Epstein’s . . . disrespect for the law” that prompted [the] “Superior Court of the Virgin Islands’ request” for evidence of “financial transactions and communications between Black and several of his named entities with Epstein,” include Black’s holdings already under criminal investigation, such as Black Family Partners, LP and Elysium Management, LLC.

“Black was connected to anonymous donations to MIT linked to Epstein in a 2019 investigation. . . . A spokesperson for Apollo Global Management told CNN.” 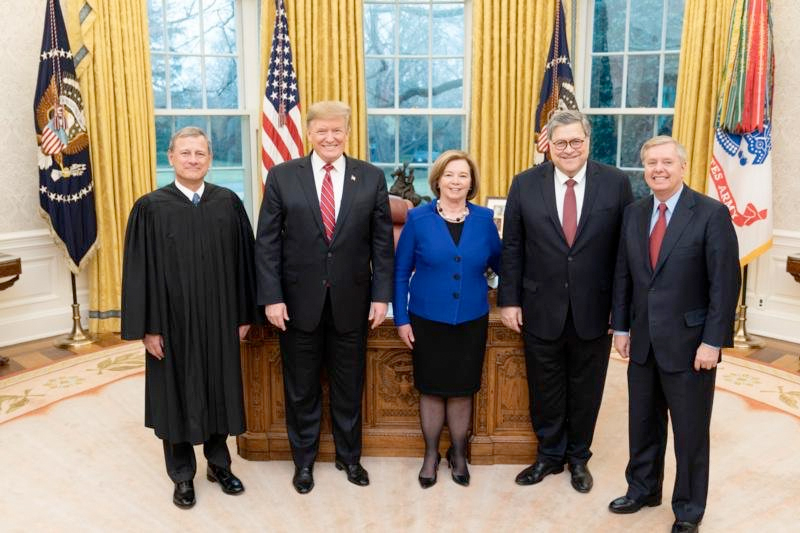 Thus far generally neglected are Black’s additional ties to Epstein involving the Bronfmans. Charles and Edgar Bronfman, who along with Leslie Wexner and the late Robert Maxwell, served as key financiers in The Mega Group–the Jewish Syndicate intertwined with the Aryan Deep State leadership.

Given these facts, under these dire circumstances imposing population controls that severely deprive people of their freedoms and security, further examination of the hallucinogenic drug DMT, including its featured role in the Deep State’s ‘religious’ neuroscience program, advanced for instance at Johns Hopkins University and MIT’s Media Labs linking drugs, psychological operations, and military-style population programming is indicated.
Scroll for more
Tap