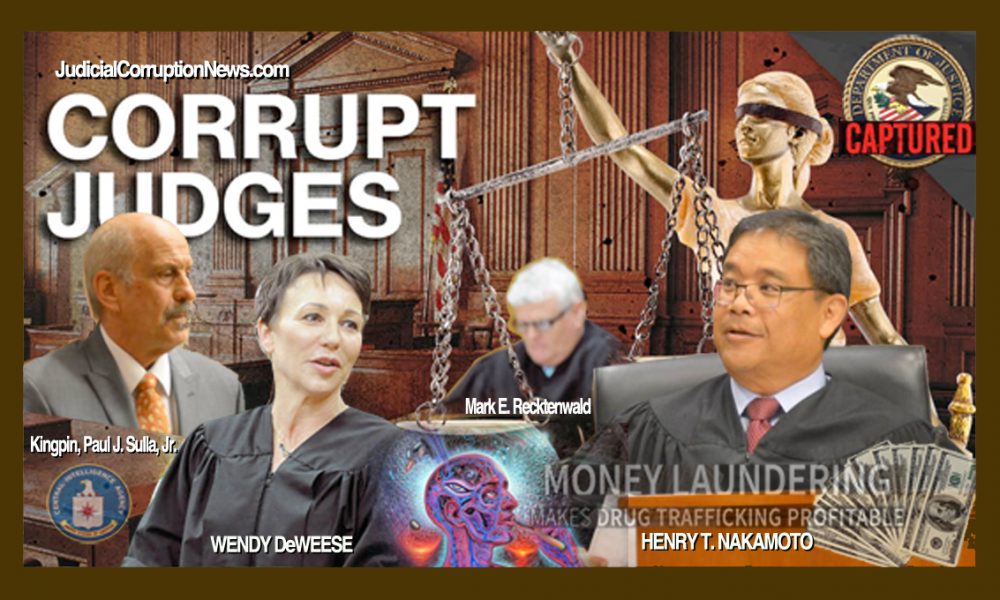 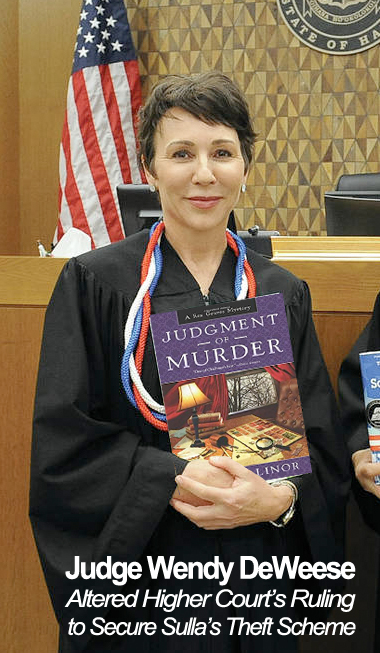 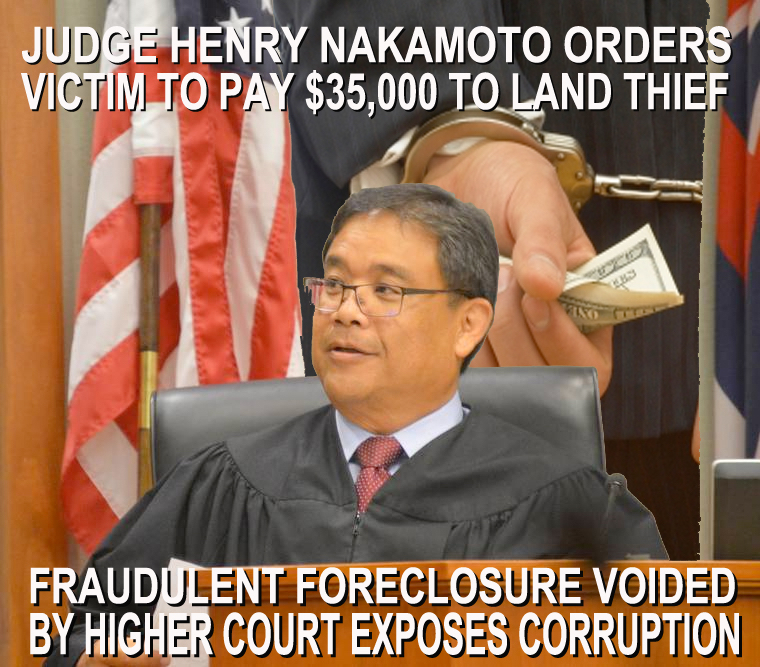 According to Dr. Horowitz’s “Motion for Reconsideration,” denied by Judge DeWeese, and another by Judge Henry Nakamoto, public records prove Sulla’s thievery was aided-and-abetted by Judge Wendy DeWeese.

Judge Wendy DeWeese is advertised by the Hawaii State Judiciary as having served “as a law clerk for Judge Ronald Ibarra (ret).” Apparently, Judge Ibarra taught DeWeese that it was okay to tamper with evidence and preclude justice.

HERE is a comparison of the original versus altered record of Judge Ibarra (the past “Chief Justice” of the Third Circuit “‘Drug Court” of Hawaii), “whiting out” vitally-important handwritten notes of legal records. The original copy was filed by Dr. Horowitz to prove Ibarra’s subordinate, Judge Glenn S. Hara, aided-and-abetted Sulla’s theft scheme. Regardless, Third Circuit officials continued maliciously prosecuting the doctor and Ms. Kane to steal their properties.

Judge Ibarra tampered with that evidence and his court record, much like Judge Wendy DeWeese did to grant Sulla “quiet title” to Dr. Horowitz’s property. By tampering with her record, DeWeese intentionally concealed and altered the Supreme Court of Hawaii’s Intermediate Court of Appeals (“ICA”) remand instructions to her and Judge Henry Nakamoto.

Both then consummated Sulla’s theft scheme and the doctor’s malicious prosecution. (CLICK HERE to read a copy of the doctor’s indictment in his Appeal Brief, citing Judge DeWeese’s evidence tampering.) 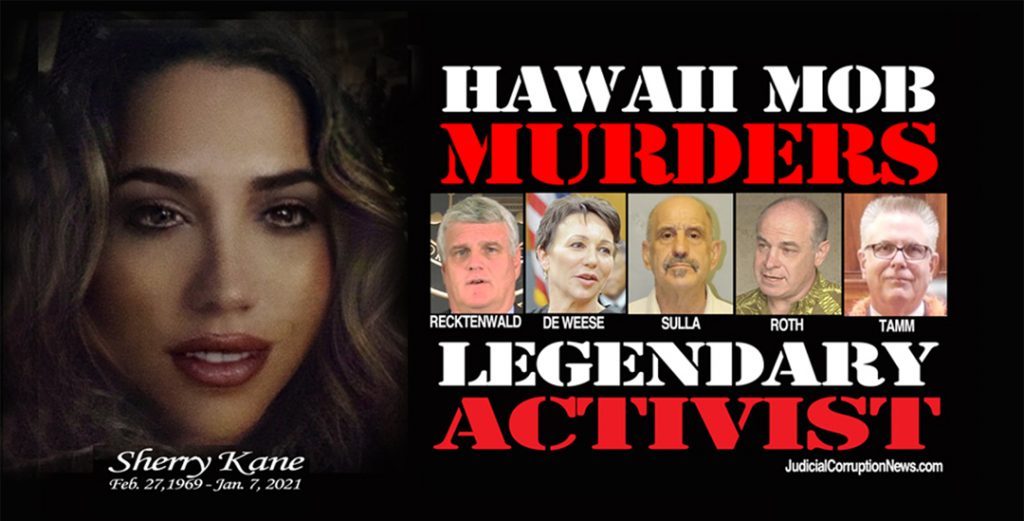 Thousands have viewed the video of Sulla’s sham “non-judicial foreclosure” of the couple’s property. There, Sherri Kane is seen confronting Sulla to stop his forgery-based crime. Sulla took Dr. Horowitz’s mortgage and note and transferred them into a non-existing “paper church” to bring the foreclosure. Later, Sulla incorporated that sham “Gospel of Believers” by filing a set of forged “Articles of Incorporation.” That forgery, one of many committed by Sulla, plainly shows photocopied signatures, altered dates, and inconsecutive page numbers.

None of that mattered to Judge Wendy DeWeese when she granted Sulla “quiet title” to the couple’s property. Nor did it matter to Judge Henry Nakamoto when he fined Horowitz $35,000.00 for simply filing public notices of ongoing lawsuits in which he opposed the judicial corruption.

Dr. Horowitz and Sherri Kane were not alone in their efforts to combat Hawaii’s public corruption. Bribed and complicit politicians, law-enforcers, and media pundits, abound in “paradise.”

County of Hawaii records prove that Sulla committed the same crime–forgery for property theivery–to steal a most valuable property intertwined with U.S. National Security. The 11 acre parcel Sulla and County officials conspired to steal was originally donated to provide 80 needy families with affordable housing. Lava flows had dispossessed many who needed the planned affordable housing.

The donor of that “non-profit” property just happened to be the Ukrainian/Armenian energy conglomerate competing against the Russian-Burisma cartel favored by Joe and Hunter Biden. What President Trump opposed–Russia supplying gas and oil through the Ukraine to supply Europe–the Bidens approved with obvious conflicting interests in Burisma.

Sulla and County of Hawaii officials played the same geopolitics and dirty tricks to similarly deprive Sulla’s and Burisma’s competitors–“the Grigoryants”–of their property in Waikaloa. 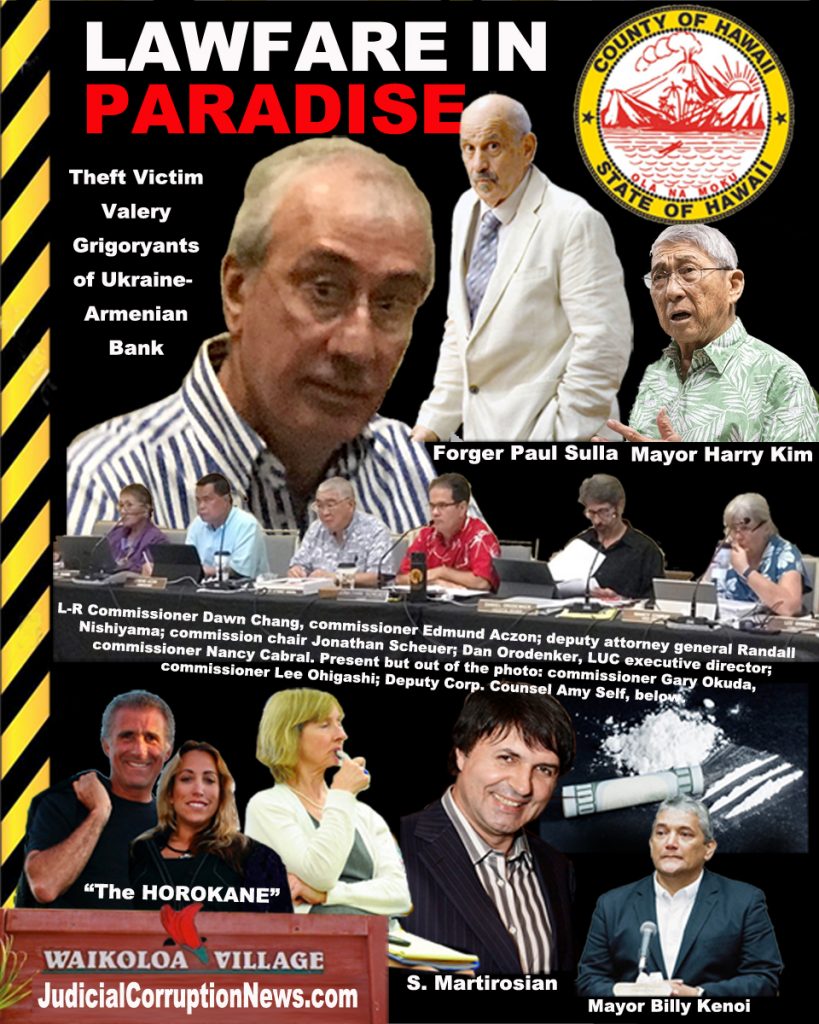 Collage of parties involved in the Hawaii County theft of “non-profit” property, including the Mayors Kenoi and Kim, drug dealers Paul Sulla and Stephan Martirosian (both arrested thieves), and victims including Valery Grigoriants representing his brother Vitaly, owner of Armbusinessbank. They were the key Waikaloa Highlands investors with Morgan Stanley bank of New York. Lower left is fellow victims and whistleblowers, Dr. Leonard Horowitz and Sherri Kane. Ms. Kane was killed by the severe distress caused by Judge Wendy DeWeese’s tampering with the court record and obstructing justice to consummate kingpin Sulla’s theft of the couple’s home by forgery.

“This is among the most powerful, politically-influential, and judicially corrupt enterprises in the world,” Dr. Horowitz explained off the record.

Paul Sulla has multiple connections to the CIA. There have been at least three FBI investigations of Sulla’s drug trafficking enterprise shut down in Hawaii. Former prosecutor, Mitch Roth, now mayor of Hawaii island, dropped Sulla’s grand jury indictment for forgery in the theft of the Horowitz/Kane property.

“That tells you public corruption controls all politics and commerce in Hawaii,” the doctor concluded.

“Hawaii is America’s gateway to opium imports from Asia, cocaine trafficking from Mexico, and methamphetamine massively manufactured on the Big Island,” Horowitz explained. “That’s why the Third Circuit Court is called the “Drug Court.” It is unreasonable and irresponsible to believe the pattern-and practice of corruption favoring Sulla, committed by Judges DeWeese, Nakamoto, Mark Recktenwald, Mayors Roth, Kim and Kenoi, and all the rest, are innocent of this ‘Deep State’ influence.” 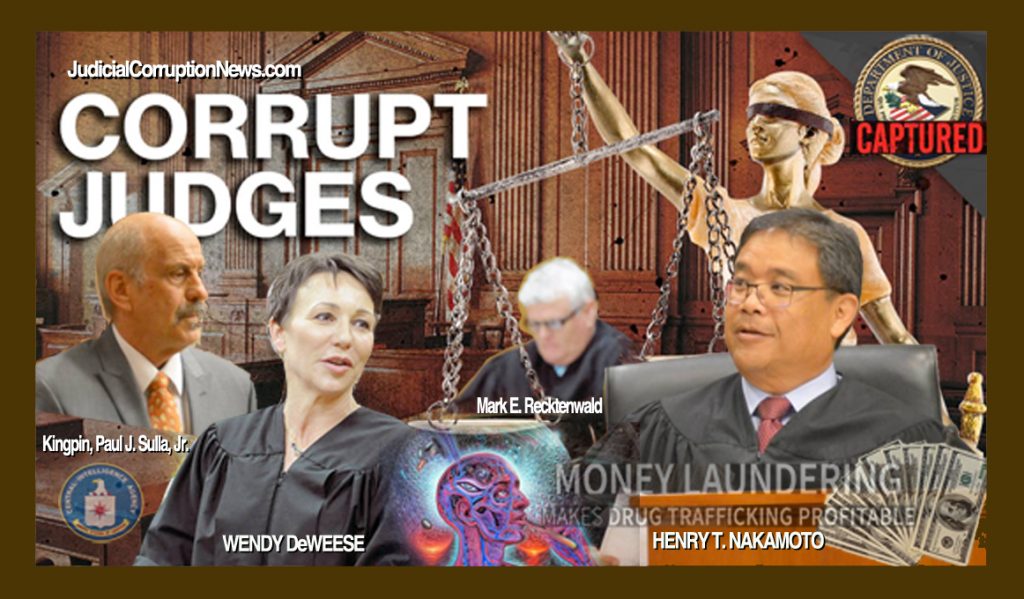 The doctor’s twenty-one (21) public records are each recorded by branches of the State or federal governments.

According to the Judicial Notice to Judge Nakamoto, this “chain-of-records” evidence “an enduring ‘pattern-and-practice’ of white collar organized crime in which attorney Paul J. Sulla, Jr. (“Sulla”) was indicted, reprimanded, or under investigation, for doing precisely what he has done in these proceedings—filing falsely and arguing “recklessly” to convert tax liabilities and/or real properties for unjust enrichment.”

Nakamoto and DeWeese continued to indemnify, immunize, and/or aid-and-abet Sulla by neglecting his string of forgeries, his conflicting interests, and those of his “alter-egos”

“To be clear,” Horowitz wrote Judge Henry Nakamoto, “willful blindness to these public records is an ‘administrative’ not ‘judicial’ action voiding judicial immunity during the commission of crime.”

Following instructions on ProSeLegalAide.com, the doctor gathered public records (“discovery”) from the U.S. Tax Court, the State of Hawaii, the Hawaii Supreme Court’s Office of Disciplinary Counsel, the County of Hawaii Tax Office, the Hawaii Bureau of Conveyances, and the Hawaii Department of Commerce and Consumer Affairs (“DCCA”). One after another the records showed how Sulla altered or forged mortgages or deeds transferring real properties to entities controlled by the drug kingpin. Yet, over and over again, public corruption prevented his prosecution. 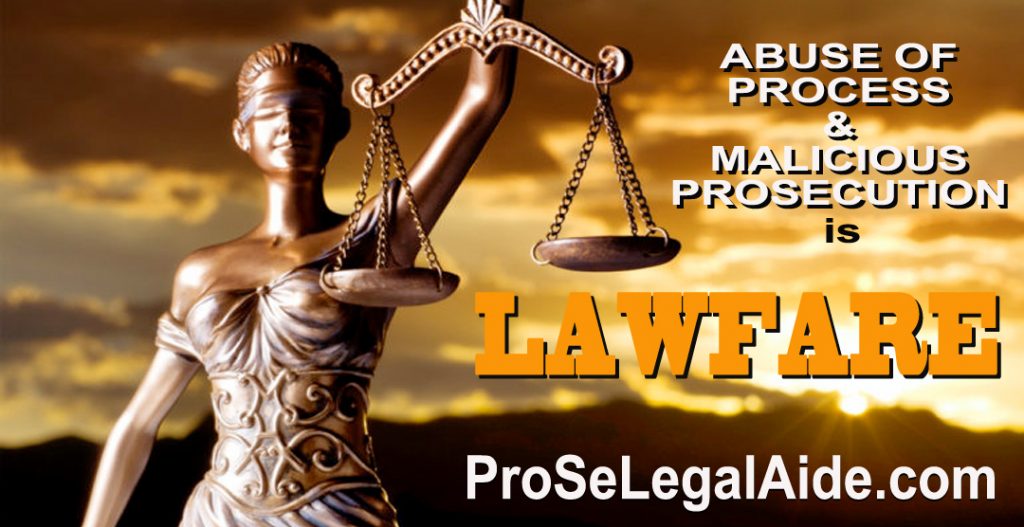 Sulla’s drug enterprise became huge. The CIA-linked lawyer with FBI informant-like immunity became infamous. National attention grew from videos and articles beyond those published by “The Horokane.” Officials at KKCR public radio in Kauai published their sabotage at the hands of Sulla and his Hollywood handlers. Later, nationally-known investigator, Frank Parlato, (who broke the NEXIVM sex cult scandal involving the “Bronfman sisters” tied to the Mexican drug cartel, Jeffrey Bronfman, and the Bronfman crime family) exposed Sulla for illegally manufacturing and shipping the new “designer LSD” called “Ayahuasca” to the mainland. 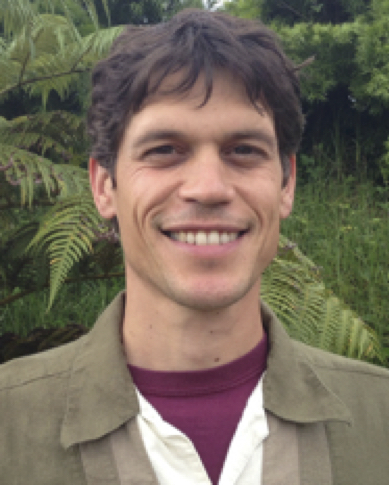 “Hoasca tea” sales exploded across north America since 2015. According to federal estimates, annual sales now exceed $1 billion. The expanding industry is largely due to Hawaii officials doing nothing to stop Sulla & Co.

Ayahuasca contains the Class I narcotic hallucinogen dimethyltryptamine, and Sulla and his sons operate the main supply racket. The domestically-manufactured “tea” derives from a root that only grows well in Hawaii’s tropical rain forests. Sulla’s “Daime Church” mass-produces this north of Hilo. “Rituals” there are frequented by fellow lawyers, and instances of rape and murder are rumored.

Regarding the Waikaloa land heist, Sulla used Jasun’s “JSM Enterprises” in a self-proclaimed real estate “consortium” to commit the conversion.

JSM Enterprises was cited by former Hawaii County Mayor, Harry Kim, in a letter to U.S. military officials seeking federal aid for the crime. Therein, Kim ordered un-exploded bombs left by the Army to be removed from the Waikaloa Highlands property.

Once done, County officials aided-and-abetted Sulla’s conveyance of that property, by illegal warranty deed, to another sham company set us by Sulla. The Plumeria, LLC/Waikaloa property heist profited Sulla and his County cohorts $1.5 million, according to the Executive Summary published by JudicialCorruptionNews.com. 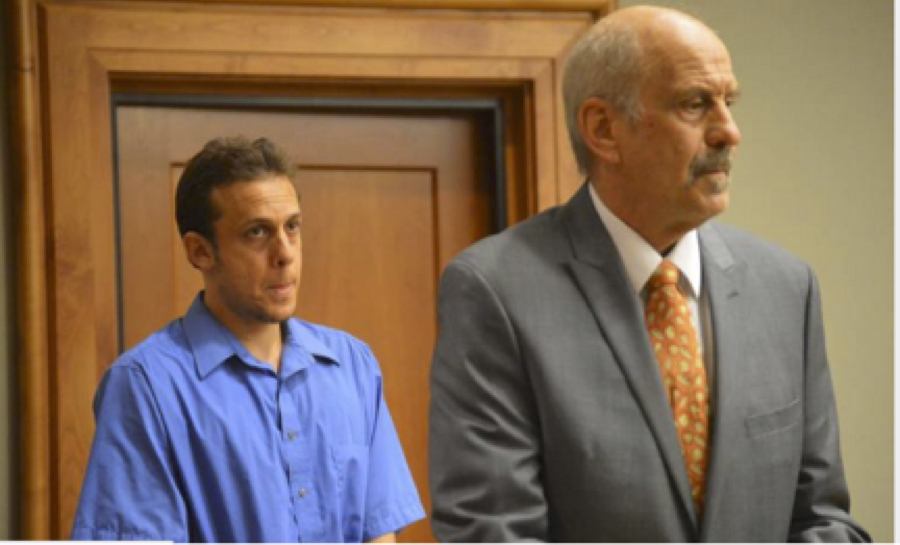 It was largely Krippner’s writings that legitimized Timothy Leary and Alan Watt’s “turn on and drop out” drug cult.

Krippner later published The Future of Religion hyping psychotropic drugs, including psilocybin, LSD, and DMT to “experience” God. Science shows the ayahuasca “experience” is actually a “near-death” episode caused by restricted oxygen to the brain. 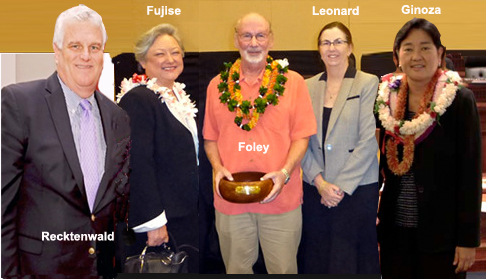 Supreme Court Chief Justice Recktenwald (left) stands beside three women judges who completely disregarded Judge Foley (center) who decided to not impose transcripts deemed completely unnecessary by Horowitz to prove clearly and convincingly Sulla’s motion to vacate the doctor’s $200K jury award was filed much too late, according to HRCP Rule 50b. The women, nonetheless, disregarded all the facts, defied Judge Foley’s ruling, denied Dr. Horowitz’s and Ms. Kane’s pleadings opposing the theft of the couple’s jury award and entire property. They then sent the couple back to the Third Circuit Court to be ‘raped’ more. Over-and-over again, since 2005, corrupted judges in the Third Circuit Court persecuted and maliciously prosecuted the Horowitz family. The judges complicity in the thievery and corruption caused Ms. Kane such severe distress that she suffered a stroke on December 17, 2020 and died. Horowitz is charging the “Hawaii Mob,” especially Judges Wendy DeWeese and Judge Henry Nakamoto with “reckless manslaughter.”

Dr. Horowitz concludes in his court filing that “[s]ubstantial evidence of torts and crimes committed by Mr. Sulla” have been “favored by Third Circuit Court judges Nakamoto and DeWeese. . . . These records show Sulla’s enduring pattern-and-practice of ‘reckless’ arguing and illegal filings continuing.”

The doctor urges the courts to join Sulla as an “indispensable party” to stop concealing his “real party in interest.” He should be joined as a “proper party plaintiff” and face prosecution for claims of forgery and theft.

The Judicial Notice makes known that Horowitz is not alone. People all across Hawaii (and the mainland too) are being damaged by this “Drug Court” that harbors Sulla and his crime family. Many others have been prejudiced by this Third Circuit Court’s corruption. Horowitz, who has been attempting to defend his civil rights, due process rights, and property rights, from being deprived since 2005, invites others to join the Facebook group, Report Corruption in Hawaii. 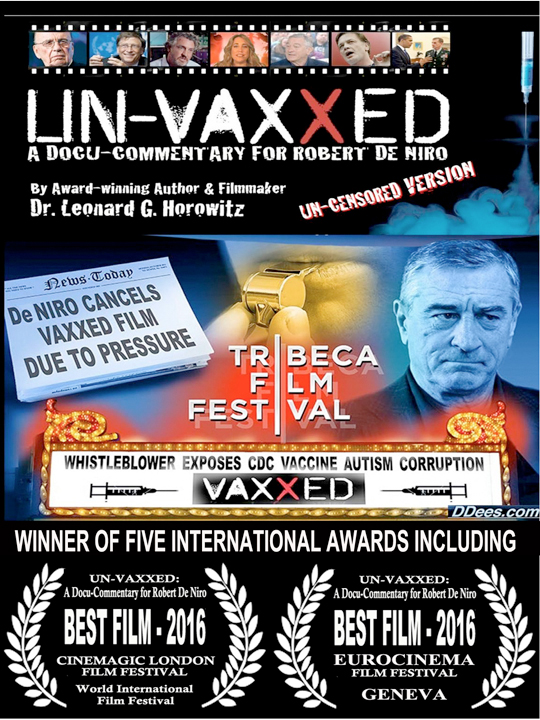 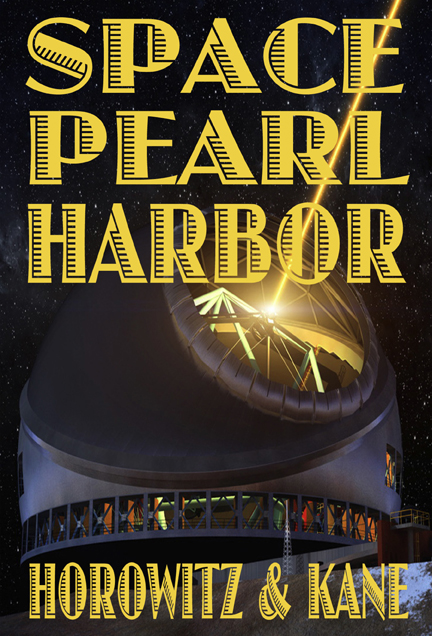 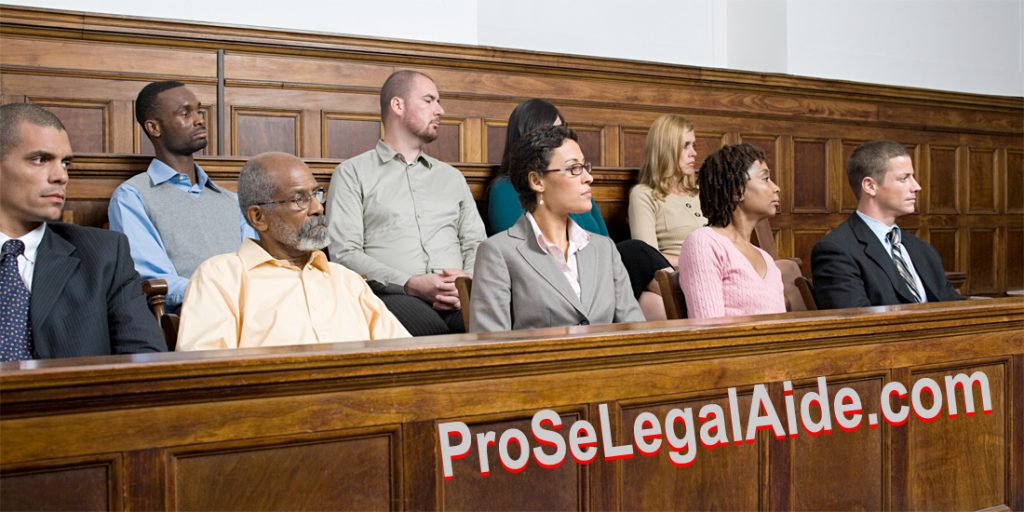 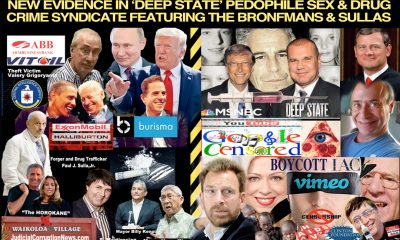