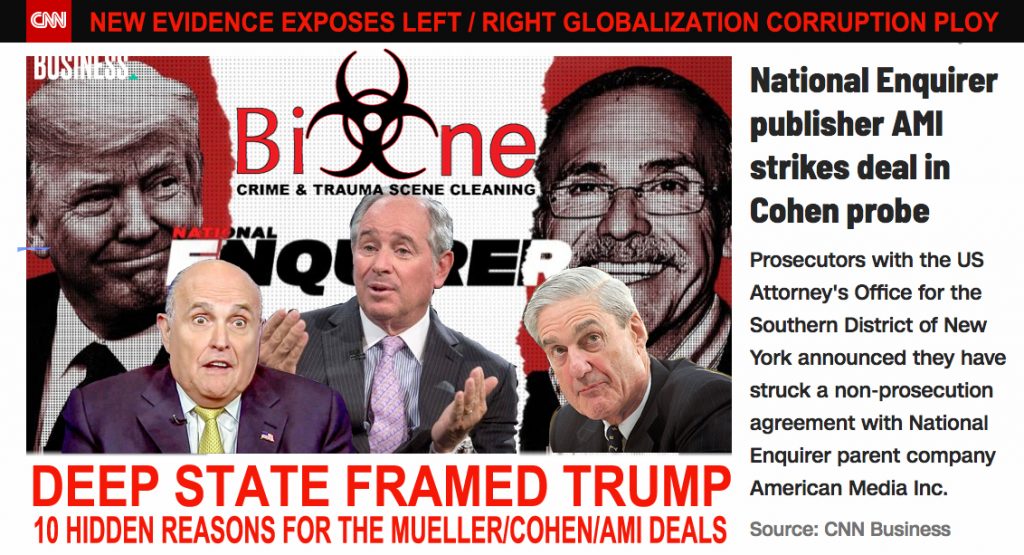 LAS VEGAS (12-13-18)–immediately following the 9/11 attacks, on September 18, 2001, five letters containing anthrax were claimed to have been mailed to ABC News, CBS News, NBC News, the New York Post, and one to the National Enquirer at AMI in Boca Raton, Florida. Two more anthrax mailings were sent from Trenton, N.J. three weeks later. One went to Democratic Senator Patrick Leahy–the Judiciary Committee Chairman–and the other to Tom Daschle, the Senate Majority leader. Dashle, like Leahy, had opposed “drug cartel legislation.” These men voted in favor of consumers, and against policies that would have protected and enriched Big Pharma, the Bush Cartel, and the Deep State.

One year earlier, with Bill Clinton in the White House, and 9/11 being planned, Leahy crossed the Bush mob again. The brave Vermont Senator co-signed a letter sent to the Appropriations Committee requesting a delay in implementing Section 304 in H.R. 4392–the Intelligence Authorization Act for 2001. The legislation dealt with the gathering and sharing of secret private intelligence over the Internet. This was the key issue that purportedly caused previous CIA employee and NSA contractor, Edward Snowden, to commit treason at his post in Honolulu, Hawaii, at Booz Allen Hamilton.

Leahy, and his supporters, also attempted to protect Americans’ First Amendment rights and the Whistleblower Protection Act.  At that same time Leahy opposed unbridled drug industry profits, as well as the Iraqi War. That war made the Bush family and Dick Cheney’s Halliburton Company a bloody fortune.

Evidencing Cheney’s hatred for Leahy, in 2004, the  Vice President under George W. Bush told Leahy, “Go fuck yourself” in retaliation for Leahy’s opposition to Halliburton‘s activities in Iraq. 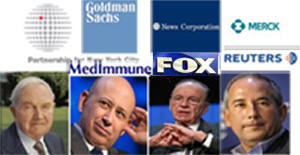 These and other major shareholders in Nalco profited by Boots & Coots selection of the Exxon-Mobil product Corexit used in the “clean-up” as an oil-dispersant. Nalco formed from a joint venture with the David Rockefeller-controlled Exxon Chemical Co. in 1994. Then, in 2003, The Blackstone Group, Apollo Management L.P., and Goldman Sachs Capital Partners, bought Ondeo Nalco for $4.3 billon dollars.  These three companies, we revealed, are partnered in the Rockefeller-founded, Royal Family-chartered, Partnership for New York City (PFNYC ) that reflects the heart of the Deep State that meddles into virtually every major commercial crime and imposition, according to our discoveries. The PFNYC is akin to a private club accommodating key industrialists within the Council on Foreign Relations and the petrochemical-pharmaceutical/biotech cartel. 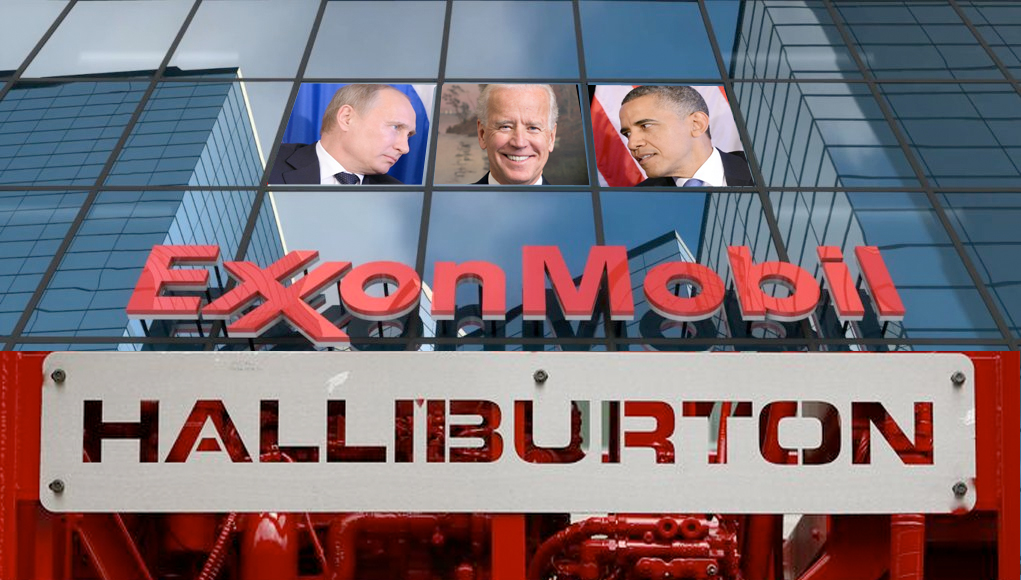 Repeatedly complicit private equity investors include the Blackstone Group, Apollo Management LP and Goldman Sachs Capital Partners that not only collaborated to acquire the Nalco Company from Suez SA for US$4.2 billion, but also “veered” the 9/11 reconstruction fund money to Las Vegas to build the “City Center” as exposed by these authors in the film PHARMAWHORES: The Showtime Sting of Penn & Teller.

So it is not surprising that Leahy and Democrat Daschle would be targeted with anthrax, and Halliburton Technologies would be partnered with Rudy Giuliani’s Bio ONE–the Anthrax Mailings “crime scene clean up company” working with Sabre Energy Services.

Nor is it surprising that Bio ONE’s footprint on the Internet is virtually non-existant; and its ongoing work with Sabre and the Deep State is heavily concealed. 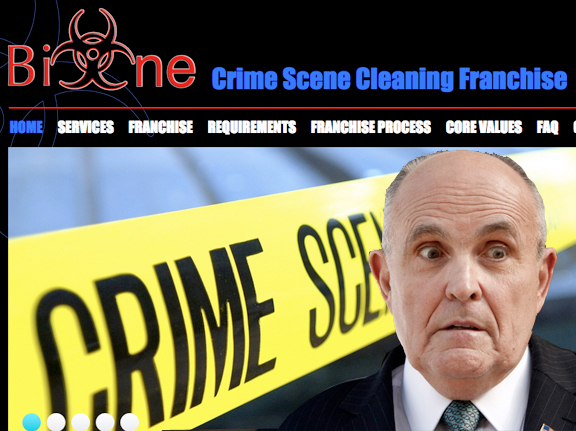 Vanity Fair nearly exclusively exposed the tip of Giuliani’s Bio ONE dealings, and below is a news clipping from the Lakeland Ledger heralding the company. 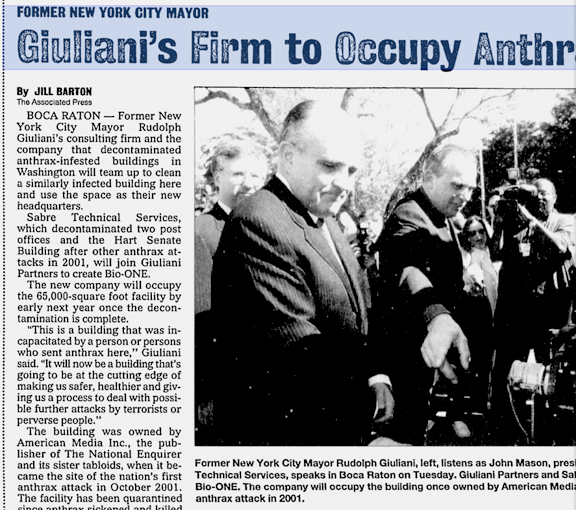 Foul play is further evidenced by the New York Times that reported on October 9, 2001, that the FBI investigation of anthrax mailings headed by Robert Mueller was stymied.

By then, Dr. Horowitz had already alerted the FBI about this bioterrorizing anthrax scheme, and within weeks, dutifully responded to Mueller’s requests for public assistance to arrest the mailer(s). Horowitz prepared and published the meticulously detailed “Anthrax Mailings Chart” (shown below) laying out all the suspects. These included the Battelle Memorial Institute as the only viable source of the mailed anthrax. Then Horowitz submitted this intelligence to Robert Mueller personally,  through the FBI, and also published it in an open letter to Mueller widely distributed on the Internet.

Following these Horowitz publications and Mueller alerts, the FBI responded by making “citizen Horowitz” a “suspect,” not an “informant,” in these crimes. Thereafter, federal agents persecuted and eventually bankrupted the doctor for his good faith efforts to serve the “National Security State” and the Justice Department to save lives.

By his experience, Dr. Horowitz obtained clear and convincing evidence of the treasonous “capture” of the FBI and Justice Department by the Deep State.

In efforts to  “neutralize” him, agents associated with the CIA and Justice Department, including lawyers and court officers in Hawaii where he sought to develop his professional career, persecuted, railroaded, stonewalled, and smeared this award-winning humanitarian author and filmmaker in and out of courts for a dozen years. The “fix was in,” and these “Dark State” agents followed a precise protocol called “The 4 Ds” to “Deny, Disrupt, Degrade and Deceive” the doctor’s family, businesses, reputation, and estate. 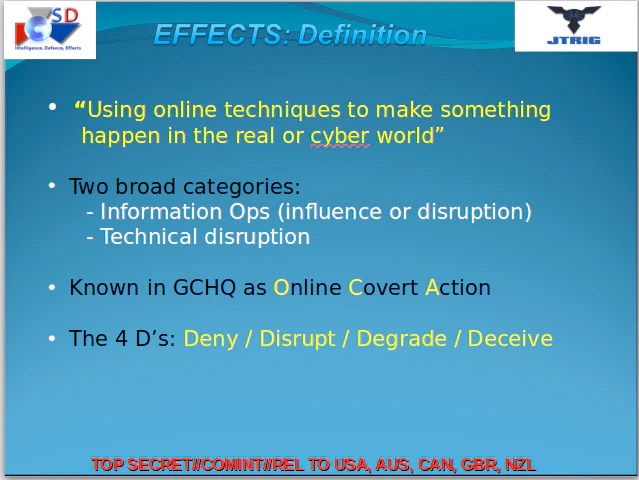 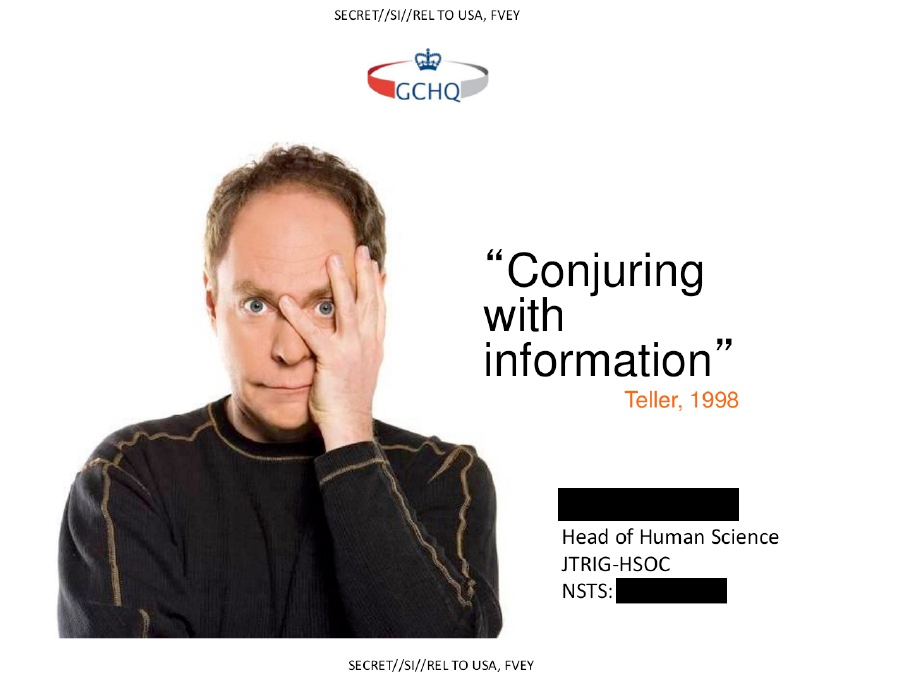 To further conceal these facts evidencing treason against the United States, and genocide damaging We The People, Mueller’s FBI and the U.S. Centers for Disease Control (CDC) were blamed by the Deep State’s media for destroying critical evidence in the anthrax mailings. According to the controlled media reports, the Ames, Iowa strain of anthrax, determined to be the one mailed from Trenton to Florida and Washington’s capitol, had been suspiciously selected for destruction by the FBI. Iowa State officials suddenly confessed that they were ordered by the FBI and CDC officials to destroy all of the remaining Ames, Iowa anthrax strains on or about October 8-9. The evidence in the archive was then, purportedly, “destroyed on Oct. 10 and 11.” This fact establishes probable cause to indict Mueller for evidence tampering, obstruction of justice, complicity in murder, and treason.

The FBI’s aversion to these facts, and the media’s diversion to less compelling evidence, compounds evidence of this treason. For instance, as national attention was focusing on the FBI’s investigation of the anthrax mailings, Trump’s chief campaign propagandist, Giuliani, was making multi-million dollar deals for Bio ONE and the American Media, Inc (AMI) building–the crime scene in Boca Raton, Florida, wherein more criminal evidence was destroyed.

Certainly FBI investigators could have, and should have, done what these authors did. Acquire this screenshot that identifies “Who Is” Bio ONE’s initial registrant on July 29, 2001; that is, precisely two (2) months before the Anthrax Mailings were committed. It shows Giuliani’s partner, Egis Technology, Inc., and Registrant Andrew Ling of Taipei, Taiwan, secured their web domain, to administer profits anticipating the anthrax attacks and federal clean up contract. 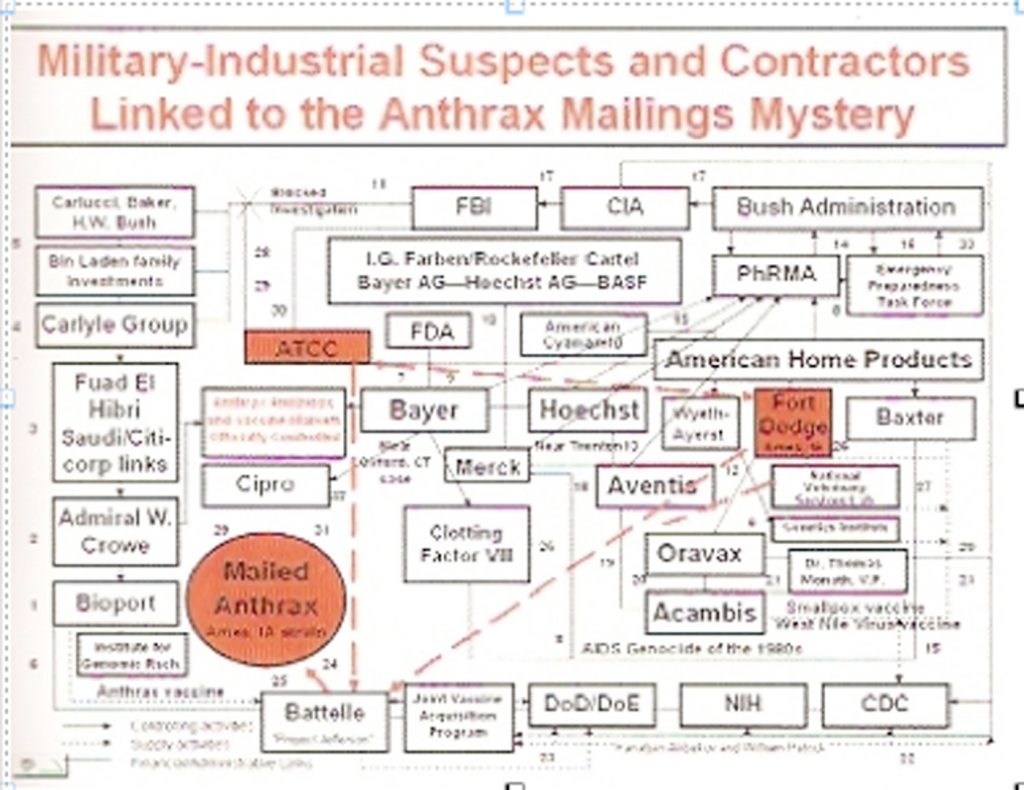 Not surprisingly, Egis Technology, Inc. is a security services company; not an environmental clean-up firm. Giuliani’s partner advanced the technologies used to detect explosives and biological weapons. Their products and services are used to “secure” governments and multi-national corporations advancing globalization. This can be known by researching EGIS’s history and reading patent No. US20120135537 A1.

The fact that on October 7, 2001, as the extortionate anthrax exploding letters were being mailed to Senators Daschle and Leahy, orders to destroy that particular strain, among hundreds of strains, were issued by FBI and CDC officials. These facts compound ample circumstantial evidence and probable cause to investigate Mueller and the FBI for treason, racketeering, obstructing justice, and aiding-and-abetting a deadly conspiracy administered from the deepest levels of the Deep State.

Yet, we hear nothing from the FBI, or complicit media, about these urgent matters of National Security.

Accordingly, Mueller must be investigated for these crimes, not positioned with immunity as a Special Prosecutor perfectly obscuring his complicity in deep State-administered serial slayings, mass murders, and genocide.

Additional commercial motives for the mailings were concealed by the FBI “in plain sight.” Mueller’s administration reported, “In early 2002, shortly after the anthrax letter attacks, the FDA re-approved the [anthrax] vaccine for human use, production at Bioport resumed, and anthrax research at USAMRIID continued without interruption. In 2003, Ivins [later falsely accused of committing the mailings, then exonerated] received “the highest honor given to Defense Department civilians at a Pentagon ceremony on March 14, 2003” for his work in “getting the anthrax vaccine back into production.” (See: FBI Warrant Affidavit Pursuant to Bruce Ivans)

This commercial bioterrorism, and public records exposing the parties profiting from the anthrax mailings . . . , left a paper trail obviously available to Robert Mueller and the FBI . . .

Below is even more compounding evidence of this pattern of Deep State racketeering in deadly bioterrorism and genocidal depopulation. 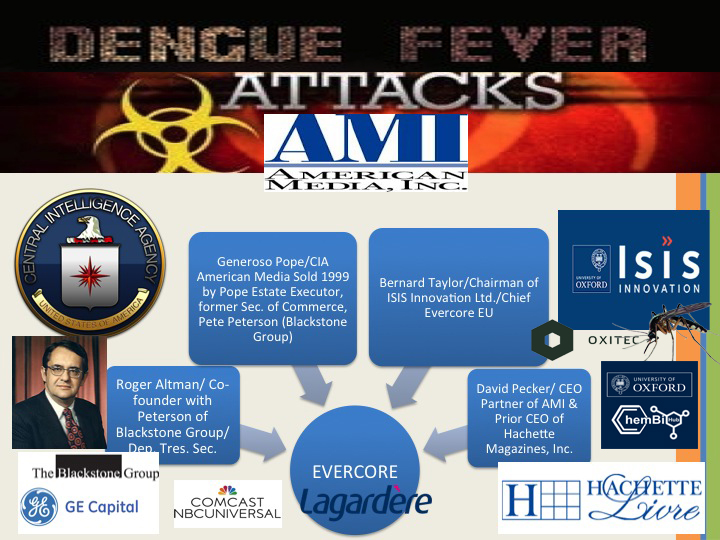 This graphic heralding AMI was prepared by Dr. Horowitz for a presentation before the Hawaii County Counsel in 2016 citing some of the key persons, corporations, and even Oxford University’s key financial institution, linked to Giuliani’s anthrax-crime-scene AMI building, outputting profitable media propaganda frightening the public about ZIKA and dengue fever. This commercial bioterrorism, and public records exposing the parties profiting most from the anthrax mailings and ZIKA fright, left a paper trail obviously available to Mueller and the FBI at the time these Deep State players began promoting ZIKA, like anthrax. But instead of CIPRO or anthrax vaccine as a remedy, these Deep State industrialists pushed the release of genetically-mutated mosquitoes to supposedly fight the new ZIKA plague. This intelligence compounds the evidence of the Bush Cartel’s and CIA’s involvements in administering a pattern of “crisis capitalism.” After successfully administering the anthrax mailings, then tampering with the evidence and obstructing justice so the perpetrators got away with the crime, they repeated a similar scheme with their ZIKA fright, again abusing their media.

This pattern of treasonous “magic”–disappearing facts and contriving emergencies–evidences the pattern necessary to establish the criminal charge of racketeering in organized crime. This pattern of treason has become increasingly obvious to people internationally, especially Americans now witnessing a media meltdown for damage control, diverting to less substantive crimes, including allegations of Russia’s meddling in the presidential election.

Compounding evidence of the “Russian meddling” diversion, prior to Trump’s election, we exposed a leading so-called “Russian” agent performing his “magic.” This agent’s disinformation campaign confused consumers, while concealing and confounding vaccination genocide on behalf of the Deep State.

Contrary to popular perception, the Deep State controls both sides of every issue. This includes the most popular “anti-vaccinationists.”

“The best way to control the opposition is to lead it ourselves,” wrote Communist strategist, Vladimir Lenin.  Accordingly, the Deep State is heavily invested in so-called “anti-vaccinationists” to carry out their muddling, population control, disease care, and depopulation.

The globalist magicians administer “CONTROLLED OPPOSITION” for every profitable venture. This is done to neutralize real effective opposition to, in this case, mass killing of Americans, and damaging youth with heavy metal poisons, and GMOs, in vaccines and drugs.